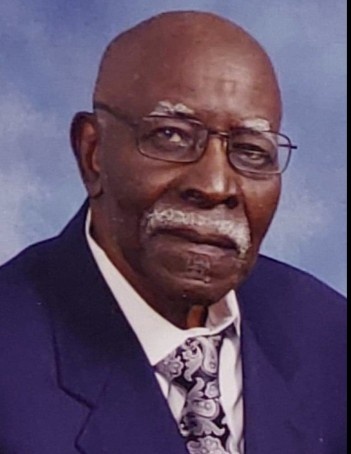 Deacon Elton Volter, Sr., son of the late Russell Volter, Sr. and Beatrice Phillips was born October 11, 1934 in Jeanerette, Louisiana in Iberia Parish in the Flattown community, the oldest of eight children. Where he was raised by his mother and stepfather Clarence Malveaux. In his own words, “Every since I was old enough to remember, Mother taught me about the love and admonition of the Lord. I grew up with the desire to be a Christian and to Worship and Obey the Lord. I always loved to sing, read the Bible and go to Sunday School. I started singing in the church and the Gospel Keys Quartet. I accepted Christ at the age of sixteen and was baptized in the Bayou Teche, Sorrel, Louisiana by Rev. AA Marks, Pastor of St. John B.C.”, where he worked in the youth church.


Elton was united in holy matrimony to Katie Lee McFarlin on September 26, 1953 in a private ceremony in her home. Into this union, nine children were born and seven survived. He moved to Houston, Texas and joined Mt. Olive Baptist Church in 1955 where he has been a member for 66 years. He was a member of the choir, Brotherhood, named Trustee in 1957 and later placed on the Building Fund Committee under Rev. G.W. Prince. Under Rev. E.L. Bible, he became the Church Financial Secretary and Chairman, Men’s Sunday School Teacher, and Male Chorus President which continued under Rev. C.E. Benton, Sr. Under the current Pastor, Dr. Theodore Baines, Sr., he was assigned Mt. Olive BC Liaison for the Brotherhood under the Independent Missionary Baptist General Association (IMBGA) in 2011 and ordained Deacon on Sunday, June 23, 2013.


He attended Four Corners Elementary, Baldwin Middle School, and Willow Street Sr. High School in Franklin, Louisiana until he began working as a seasonal field worker. A truck would arrive daily to transport him and others to various plantations to work. As he got older, he was able to plow fields and drive the tractors to the sugar mills. He was hired on at Mustang in 1954 where he worked for 44 years until full retirement in year 2000 as the First Black Skilled Welder & Foreman. He completed The Ambassador College Bible Correspondence Course of Pasadena, California in 1988. He was a quick learner and Jack of all trades.
Elton was called to sing in God’s Heavenly Choir on April 7, 2021. He was preceded in death by his parents and stepfather, brothers, Freddie Volter and Russell Volter, Jr., sister, Martha Sereal, son, Danny Volter, and four granddaughters: Latricia Volter, Erin Volter, Jamiah Sayrie, and Kyla Lashee Peters, and two grandsons, Keron and Kevon Peters.

To order memorial trees or send flowers to the family in memory of Elton Volter, Sr, please visit our flower store.
Open