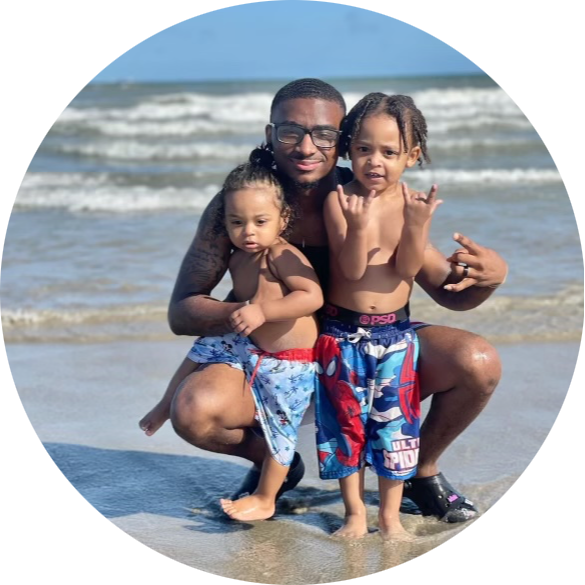 Jalen Delvon Williams was born, March 5th 1997 to Sabrina Thompson and Joseph Willams in Houston, Texas He was the fist grandson of Susan Webb & Michael Webb and the first- born son. Jalen became the leader of the pack tor younger sister Mariah (Riah) and a younger brothers Jeremiah (Bi), and Donald (Nana).

Growing up this young man was the biggest goof ball anyone could have ever met. He was the biggest class down at every school and every grade level. As he continued to grow, he found a passion in football which motivated him to get his act together because he knew it was a no pass no play! He got through all his years of school and graduated J. Frank Dobie High School as part of the class of 2o16. He was one happy person.

Around 2019, he met a young lady Vanessa Sustaita who had a 5 month old baby boy who was named Jayden Sustaita. The first person he called was his sister Riah can you watch my girfriend's baby while we go to the movies," and from that day forth, that was his child for sure and the family accepted it very well. Jalen took him in as his OWN child and did a GREAT JOB that is forever his big boy.

Jalen was very much a great person and known across the world from family and friends all the way to strangers. He was the peacemaker around everyone, never known to be confrontational or problematic at all. Ultimately he just wanted everyone to be happy just as much as he was.

He worked many, many jobs and if anyone knew him they knew for sure he had different jobs as much as
he posted it on Snapchat; until he found love in this one job called Power Vac America. What was supposed to be a temporary job turned into a permanent full-time position given the great reputation he set for himself as the youngest employee there. They loved him as a coworker a son and a little brother he definitely loved his job.

Jalen will forever be missed by everyone he interacting with during his short time on Earth. We all wish things could havewent differently for sure he had so many people to rely on at any moment but he is definitely in a better place watching over us all he is now at rest while we all handle the rest.

Arrangements are under the direction of Dynasty Memorial Mortuary, 2850 Fellows Road, Houston, Texas 77047. Phone: (713) 640-5917 Email: dynastymemorial@gmail.com. “Your Community Trusted Provider For People, By People, Serving People”. Condolences may be shared for the family online at www.dynastymemorial.com. Thank you!